Review of Bloodwalker by L.X. Caine 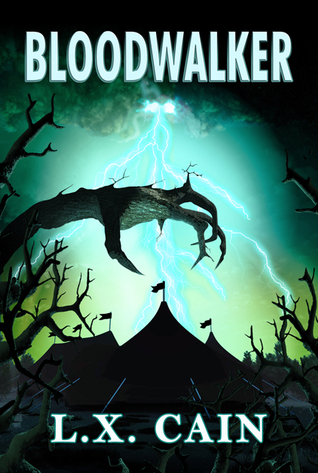 L.X. Cain lives not too far from the beautiful beaches and turquoise waters of the Red Sea. Despite the scenic delights, she’s an indoor gal and spends most of her time happily tapping away on her laptop keyboard, coming up with thrilling story ideas to entertain readers!

Bloodwalker is a very enticing book. It follows the life of circus folk. The traveling Eastern circus known as Zorka Circus is constantly looking for the next place to perform in. Due to the seeming nature of people, the circus folk handle most of their business and problems on their own. Head of security for the circus, Rurik discovers that children are missing in the different cities that they visit. One day while out on a watch, Ruirk meets the one responsible for the acts, a child kidnapping / killing clown. Ruirk uses his skills and select others that he trusts to help search for the clown.

Another group of people with a unique history enters the situation. The Skomari is a clan of people with abnormal beauty. They historical have been around for hundreds of years dressing the recently dead and communicating with spirits. Many outsiders considers them ghouls or demons.

In an attempt to keep harmony between the groups, marriage took place in their location. The Skomari were not well received but were eventually connected into the string of murders secretly surrounding the circus. One Skomari in particular, Sylvie acted with her gut and in some ways could be seen as the last representation of her clan.

I absolutely enjoyed reading the book. I quickly found myself wrapped in the story and not wanting to put it down. The plot itself was easy to understand. The subject and theme was intriguing and different enough that it felt like a breath of fresh invigorating air. Even though the air most times was far from “fresh”. Several times throughout the book, I thought the characters were trapped or going to be killed. I was rooting for their success and wondered how they would navigate out of the situation.

L.X. Caine did a wonderful job with the description of scenes and character development. Some phrases that she used made me feel as if I was truly standing watching the scene next to the characters. While written to be a stand-alone book, Bloodwalker has the potential to become a series. I would like to see what other adventures or nightmares Rurik and Sylvie encounter.

Bloodwalker is a thrilling adventure that is sure to leave you on the edge searching for more.

Get in touch with L.X.Cain at her blog

One response to “Review of Bloodwalker by L.X. Caine”