Review of Her Forbidden Cowboy by Maggie Carpenter 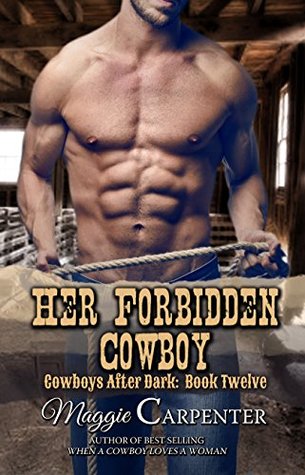 Her Forbidden Cowboy revolves around two people Scott Sampson and Cathy Coleman. Scott is the owner of Sampson’s Boarding Stables. A passion of his for years, he lives his life as a rugged guy working in the stable with horses. Cathy has two horses that she has at Sampson’s Boarding Stables, Cinnamon and Moon Doggie. Cinnamon is her jumper. Cinnamon has a pretty strong personality and seems to be filled with opinions of her own. Moon Doggie on the other hand is retired and gray colored.

The story starts roughly a year after Cathy has been boarding at Scott’s stable. While they knew of each other, they didn’t really interact much. When they did, it was normally for Scott having to step into the boarder’s arguments and business. One time, Cathy got into trouble and went further by lying and placing the blame on another boarder. Scott knew Cathy was guilty the entire time. When confronted, Cathy ended up being spanked by Scott. This set the sexual tension into action for the two. Even though Scott had a rule about not dating boarders, he found himself further drawn to Cathy.

The two were able to meet up and have a cup of coffee to learn about each other. Sparks flew and the two thought they could hit it off. Scott stated that he would be stepping down from managing the barn so that he could focus on his next venture with horses. Once the process was finished, they would see whether or not they would take the next step. When the time did come, Scott and Cathy hit it off perfectly. Behind closed doors, Scott became a dominating guy. Cathy had the submissive role. This was new and exhilarating to her. The two found they comforted and sated each other.

While this was going smoothly between the two, a storm was beginning within Cathy’s rich family. Catherine’s mom, didn’t approve of Scott and sought to split the two up before it became too serious. Cathy’s mom attempted to bribe Scott with money to push them away. With her determination, Cathy’s mom also tried to set her up with a guy she much rather would’ve seen Cathy with.

The entire situation comes to the surface during a horrible storm that happens in the area. It causes everyone to reflect on their actions and that of others. Attitudes change and the whole group of them find themselves that much closer with one another.

Of course, with most things in life, when something is good, you want more of it. Scott and Cathy were just that. Their connection and lust was strong and steamy. Cathy’s parents see that their daughter and Scott are serious. Through a series of events (romantic, manipulation, and outside factors) Scott, Cathy, and her parents grow further to learn more about each other.