Review of Next Of Sin by Lisa J Gordon 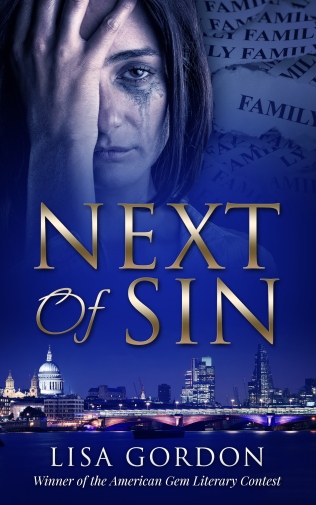 Lisa Jacqueline Gordon is an author who loves to write with freedom and originality.  Entertainment and characters who are out of the ordinary excite her. Lisa loves sports, adores politics, thrives among people, practices astrology and is a big advocate of democracy and fair trials/justice. Lisa is from Johannesburg and attended St. Mary’s; then Sandown High. She studied BCom Law at Witwatersrand University before coming to do a BSc. Ind. Economics at Warwick University in England. Lisa studied Chartered Accounting with the ICAEW, but her passion is entertaining.  Lisa vlogs about astrology and Indie Publishing and she is also a firm believer in the power of diet in physical and mental health. Lisa studied astrology with the London Faculty of Astrological Studies.

Next of Sin is an intense psychological thriller. The story follows the main character Gaby Butler. Gaby is hunted by a reoccurring dream from her childhood. In an attempt to work out the situation, Gaby ends up working through much more then she intended to. Gaby realizes that there is a serial killer potentially very close to her. Being as careful as possible, Gaby conducted research to confirm what she suspected. Each clue or contact is another step toward justice and the killer.

Gaby decides to inform her sister Megan and together they hire a detective to do more searching for evidence. While Gaby and Megan search for clues, the killer catches onto them and attempts to stop the entire investigation. The two sisters are involved in a fatal accident leaving the family in peril. With recovery time, Gaby’s memories began to return to her. She had a short period of time to act before the killer struck again. Gaby and her new allies work tirelessly to bring justice to the families affected by the entire situation as it unravels.

I really enjoyed this book. It took a while for me to warm up to it and get a handle on what was happening. Once I did understand, it was intense. I connected with Gaby and her allies. Some points I felt incredibly protective over the entire team. Other times, I wondered what traps lay ahead for them. The story had a deep effect on me. I wanted the best for the characters in the story and hoped things would be smooth. Yet with almost every shade of life, the good things or luck don’t last too long.

This brings me into my favorite aspects of the book. There were several issues that were influencing characters and the story. Trust, misunderstanding, identity, communication, and love were all highly fought factors. I appreciate the way Gordon introduced these topics causing characters and readers to reflect on their values. Some people were really open and willing to take an internal look at themselves. While others that had no desire to change or wouldn’t even properly acknowledge a situation. It was a very touching to see characters have internal strife, reflection, and growth.

Next of Sin is a compelling story that keeps readers in its bone chilling grip. If you’re in need of a dark adventure filled with death, secrets, and crime investigation, check it out!