Review of A Jealous Heart by Ester Byrt 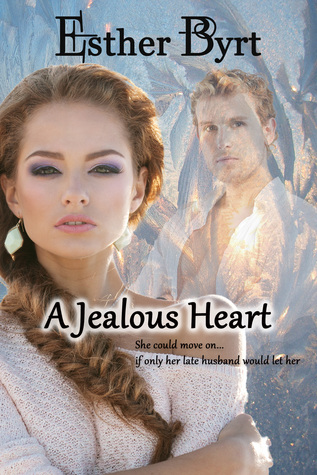 Ester Byrt lives in Canada with her husband and two yappy but loveable sheltie dogs. She has worked as a bartender, bookkeeper, computer technician, graphic designer, and web designer.

‘A Jealous Heart’ follows the life of two main characters. Jackie is a widow of two years working a youth center. One of her charges, Danielle, is in need of a place to stay. Jackie contacts Danielle’s uncle, Mark in an attempt to have him care for her. Mark quickly learns Danielle’s situation and decides to have her move in with him.

Mark works on the town’s oil field. He is intrigued by Jackie when they first meet. After deciding to take Danielle, Mark reaches out to Jackie to get some tips on raising a teenager. While somewhat successful in taking the information, he became more enamored with Jackie. After a couple lite lunches and dates, Mark and Jackie gain feelings for one another. One night, while Jackie is alone, the room temperature suddenly drops and electronics turn on and off by themselves. One evening, after a romantic date, Mark and Jackie come back to her place. They both witness the strange occurrences.

Jackie believes that she is being haunted by her deceased husband Kevin. He was very jealous and aggressive when he was alive. The incidents become more and more apparent. Voicing her opinion to Mark, they decide on the next option to get rid of the hindering ghost. Together they go to a tarot reading and have a medium come to the house. The most useful information though came unexpectedly from Danielle. She helped guide Mark and Jackie into what she thought they could do to get rid of the ghost. With strong intentions and plenty of love, Mark and Jackie eventually exorcise Kevin’s ghost from their lives.

While Byrt does a nice job making sure the story sticks to the plot, I think there were several parts in the story that could have been fleshed out better. At some points, I felt the scene was rushed. There could have been greater detail in the situations. For instance, adding further to the hot and steamy emotions that were happening between Jackie and Mark. Or work could have expanded on the cold and dangerous feelings emanating from Kevin’s ghost. Overall though, I felt everything mentioned in the book was relevant and connected.

This book shows the length that some people are willing to take in the name of love. ‘A Jealous Heart’ is a decent read if you’re looking for romance and a dash of sci-fi.