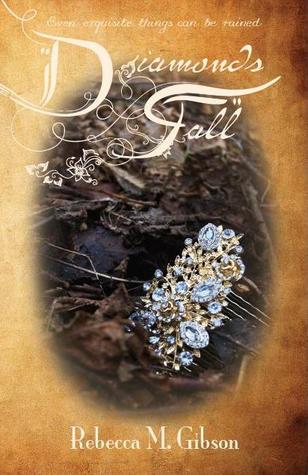 Rebecca M. Gibson grew up in Cornwall, UK surrounded by plenty of inspiration. She has always had an interest in stories ever since writing ghost stories on her mom’s computer. Gibson studied at Aberystwyth University and obtained a psychology degree. When researching World War One, Gibson became fascinated by the poems and letters written during the time period. She wanted to understand the complexity and strength of human character. Armed with that intensity, Gibson channeled it in the hardship that her character’s encounter.

Diamonds Fall is a story revolving around a young woman named Annabel Hoddington. Annabel comes from a hierarchical family and wealthy lifestyle. On the day of her 18th birthday, she plans to announce her coming-of-age and marriage to another prestigious family. Shortly before the ceremony begun Annabel snuck off into the woods to have some time alone. After entering the seemingly majestic forest, Annabel is attacked and abducted by a group of men.

As Annabel is taken further away from her home, she is humiliated and abused. She eventually finds herself isolated inside a horse stable. Tending to her was the stable boy Billy and his sister Patsy. Annabel grasps that she is in a tiny village. As she realizes more about the situation, she learns more of her captors Tom and Trevor. With time, the three find comfort and companionship within each other. They grow to have the same common enemies.

Annabel was tested on every level to rise above her circumstance. Gibson gives the reader a clear understanding to the mindset that Annabel was in. She had to change most of her behaviors and thoughts in order to survive in the village. While intense and difficult at times, Annabel finds a way to overcome whatever obstacle is put in her way. From a mental perspective, it is interesting to look at the change that one would undergo is exposed to the situation. The story highlights the good, bad, and neutral parts of life. It also shows the interconnectedness of these variables and how strong relationships or bonds are formed.

There were a couple of things that didn’t quite make sense to me. At the beginning of the story, readers are introduced to Annabel’s way of life. It would have made for stronger character development if there was more detail in her life before the abduction. Readers are left most guessing at the lifestyle that Annabel and her family had. Another scene that was odd was the forested area that Annabel was taken, it seems sketchy or too convenient. The area was relatively close to her living quarters. Considering the importance of the day and the degree of attack, I expected someone to hear her or more information on those that were searching for Annabel.

Overall Gibson does an amazing job creating scenes that are beautifully detailed and captivating. There were instances where I felt as if I was locked in the stable with Annabel and others. The level of expression literally took my breath away. The story was laid out in a way that made it easy for the reader to follow along and fall into the dialogue. We find that Annabel ultimately learned to accept life with whatever the situation presents. It truly goes to show that nothing is guaranteed in life.