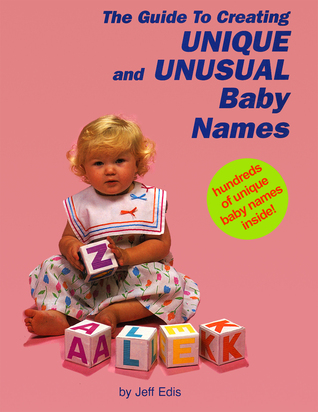 Jeff Edis was born and raised in Perth, Western Australia. He is currently a music producer having recently completed production of the lounge, chillout album “Galactic Lounge” by The Midnight Wookiee Combo. His first book, The Guide to Creating Unique and Unusual Baby Names, created a stir when released in 1990, and went on to sell thousands of copies worldwide.

The Guide to Creating Unique and Unusual Baby Names is a short book with ideas for creating baby names. Edis presents a list of names using methods that are mentioned. He then gives a brief description of how to create or find names yourself. Some cases, I thought were an interesting way to create new names.

Name crossing is the act of taking two people’s names and blending them together. This method has the most potential to me. It literally is a merger of people, why not merge their names as well! Three part syllable connection composes names using base syllables and allows a person to be able to specify sounds they would like in a name. This method could create some really unique sounding names due to spelling based on syllables. Change of spelling is a technique that rearranges the letters in a name to create a different name.

There are several chapters that use different means to be able to have a name. Flipping through magazines, atlas, and other printed publications are areas that people can utilize. While it is something to note, I think there are too many cases of this in the book. It’s common for people to do that, thus I feel it isn’t necessary to mention this media often. These are all essentially the same method.

One thing that stuck out to me is that the book is tailored to future parents. While understandably so, it is fairly limiting to its audience. Parents will utilize this book only during the naming process and discard it afterwards. Whereas if geared towards others like writers, there’s more potential for the book to be used.

All-in-all this is a decent book to check out if you’re in the market for names.