Review of An Empire of Traitors by Serban Valentin Constantin Enache 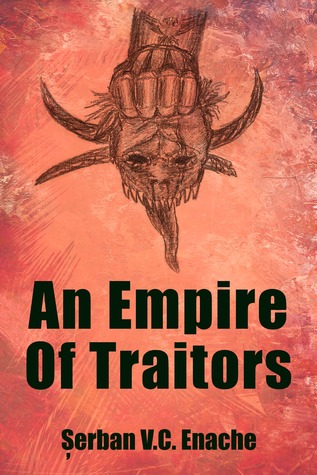 Serban Valentin Constantin Enache was born on March 25, 1989 in Bucharest, Romania. He is licensed in journalism and is the creator of the Of Hate And Laughter series. His interests are: MMT (modern monetary theory), politics, history, literature, television, movies, games, and music (from epic soundtracks to gothic metal).

An Empire of Traitors is the first book in a series titled Of Hate and Laughter. It’s a story about a far off land and its inhabitants. The land is split into five different realms, each of which is governed by noble families of the area. All together the empire is ruled over by royal blood known as the Sun Born. All families seek to gain honor and fortunes. Some are loyal and honorable to the throne and oaths that they have taken. Other members are willing to do whatever it takes to gain more power.

The story takes place eight years after a severely bloody civil war between the Empire’s Inquisition and a worshipper of blood gods known as Zygar Ferus. The Sun Born emperor, Hagyai Rovines Mero, is worried about the progression of his blood line through his son. The emperor sends a named Sycarus to a far off land to re-ignite an ancient custom of marrying with Desertland people known as Aharo. As people in the empire discover the emperor’s plans, dissention begins to spread wide. Being pre-occupied with his own thoughts, he fails to notice and act on the treachery that is spreading in his realm. From another distant land his exiled brother, Amarius Soronius decides to conquer the throne and take back his seat as the emperor of the land.

With the aid of several nobles, Amarius returns to the empire. He locks his brother in a prison cell and takes the crown for himself. He begins to settle debts and honor those that assisted him. While things seem to work out in the aftermath, the tidal wave of dissent is fully in motion.

In another part of the empire, a woman of the holy faith named Drakanes witnesses the lies and deceit of people in power. She witnesses a falsehood of a public trail and decides to defend the man. After a grueling argument and trail by battle, Drakanes wins. She is honored by moving up in the ranks of the holy faith. In her new seat of power, she learns of even more treachery as her life is placed on the line again.

The story also takes points of interest in the Northlands. This area is ruled by Kalafar Sodomis. While him and his brother act accordingly for their family, they notice the change of the lands in the South with the emperor. Weighing on the side of caution, the family decides to wait further to see the outcome of the war. In the midst of handling affairs, past deeds of other lords come to the forefront and the Warden of Northlands must take action or justice.

One quote that stood out to me that encompasses the storyline (and much of “real life” as well) is “All the world’s a stage; a stage of actors, jugglers dancers, singers, storytellers. And the puppeteers are neither gods, nor kings, nor priests but simple men, wicked men, insidious and cruel, liar and sweet talkers. The stage is made through the toil of sheep. The sheep are kept in place, in part by shepherds, in part by wolves – and all of them are dogs. Golden fleeces adorn the outside of the stage, while the slaughter happens at the back, behind the curtains, under the loudness of music and cheer, whispers and shouts.”

As the plot unfolds for the various characters, my emotional balance and thoughts towards characters shifted. The book is in the same category of Game of Thrones. In some cases, maybe a little too similar. Nonetheless, it is an interesting book. If you are in need of a good read with a lot of twists, politics, and battle, I recommend reading An Empire Of Traitors and find out the depths in which people are willing to travel in the name of honor and power.

Check out more from the author at his site: http://serbanvcenache.blogspot.ro/