Review of Micro Stories for a Hectic World by Edward Meiman 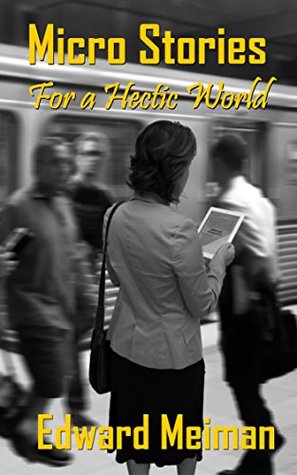 Edward Meiman was born in Louisville, Kentucky in 1964. He received a Bachelor’s degree in Mechanical Engineering at the University of Dayton in 1987 and received a Master’s degree in Industrial/Organizational Psychology from George Mason University. He has lived in Louisville, KY; Dayton & Chillicothe, OH; Detroit, MI; Madison, WI; and Metro Washington, DC. Mr. Meiman has worked in Horse Racing, Paper Production, Industrial Chemical Production, Industrial Equipment Manufacturing, Landscape Architecture, Behavioral Research, Government Consulting, and IT Development. His jobs have let him travel throughout most of the United States and to over 10 countries. His writings have included both creative and technical.

Micro Stories for a Hectic World, brings together many of the wide-ranging experiences and ideas he has gathered throughout his life. The novel is presented as short stories. The stories are made up of seven genres: Humor, Slice of Life, Fantasy, Science Fiction, Horror, Action and Adventure, and Different Perspective. All of the genres had interesting pieces that stood out to me.

“Always Archive What is Important To YOU” sheds light on a man named Martin Queiroz and his behavior of keeping a digital copy of all of his professional life. It opens the door to the legacy that people leave.

“Heavenly Strings” captures the story of a violist looking for a place to fit into the world. He travels through several areas to eventually finding a new home.

“The Dragon’s Tooth” puts you right in the middle of the action. A team of skilled fighters are battling a dragon.

“Night World” is a story about how people adapted to life on a rouge planet with no home sun. A narrative was from a tourist perspective of two major cities on the planet, Daybreak (known for its artificial Sun and paranoia culture) and Dreamscape (people who have gained heighted senses from their loss of sight).

“Their Time” was a story of the last moments of several people’s lives. A major earthquake struck off of the coast of San Diego, California and caused one of the largest and deadliest tsunami in history.

“Broaching the subject” delved into the guns-blazing version of Mr. and Mrs. Smith. A criminal team cased their next place to rob. When they arrived, the team fell into a battle with a mysteriously strong female.

“The Dark Pool of Desire” is a letter sent from a man to his sister. In the letter, the man gives his farewell as he decides to kill himself after fulfilling his life’s destiny.

What’s even more interesting about most of these stories, is that they can be used as a mental or writing prompt. Some off the stories provide fresh insight into a different territory. I appreciated this book. Like many other people, Meiman seeks to make sense of everyday living, or just get away, either way it is “Cool” to me. This book is great for someone that doesn’t want to spend too much time searching for an interesting read. All of the stories are short and meaningful.

For more information on the book and the author, visit: http://www.meiman-ed.com/microstories