Review of The Unsure Male by JT 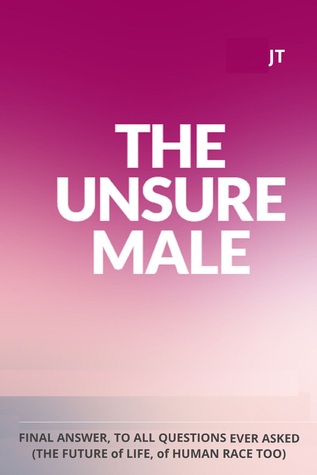 JT took to writing after retirement from the Indian Navy in 2013 after a lengthy career. During the time he had the good luck to come across colleagues, subordinates and superiors, in a wide cross section of India. Around that time, every second person encountered, one had to do business with. Being from entirely different backgrounds, it consequently opened up a kaleidoscopic view of society. JT couldn’t help but to reflect on human transactions in different colors. Each of them leading to a horde of imponderables, human or non-human, living or non-living.

The Unsure Male is written by a man named referred to as JT. While living with his wife, they noticed that the animals around their house acted differently. They were able to categorize them into two levels; those that caught prey or escaped danger and those who were slow moving or got caught by a predator. Upon looking further, JT noticed that the groups were separated mostly by gender with female and males respectively. JT became engrossed by the topic and wanted to study the evolutionary developments of life.

Animals such as lions, spiders, dogs, and bees have gender roles to support procreation. Leading up to the act of sex, males use bursts of energy to survive. Females use their energy in a more balanced state (this ensures survival and longevity). Sex happens as a method of procreation and in many instances nature has different ways to promote timing and growth. After sex though, many species of female have an anti-male ambiance. In many cases the males die or are attacked by the courted females. While describing various behaviors for animals, these were the basis for humans.

JT states that in an attempt to get away from the ‘performance deficiency’, males invest energy into others areas of life. In this manner, males were able to hide from their sex encounters. The act of leading to procreation came under heavy control. This also created many avenues to suppress women.

While the author writes his understanding of humans and his logic behind it is based on the sexual deficiency of males, he doesn’t actually explain what that looks like in humans. While a common theme for female aggression in animals, I’m not sure where that occurs in people. Or at least enough occurrences of female aggression post-sex for males to develop such a deep response against it. The closest idea to that was females being unhappy with the males for not being great at sex. At the end, JT states that with the invention of Viagra, men will be successful at every instance of sex. This further made me think it was solely based on reaching the climax.

Another thing that is difficult to understand is the narrator’s point of reference. While speaking from a singular present tense, he referenced people (human’s distant ancestors and human’s early forefathers) from the past who thought in terms of the future. It made it seem as though the ancestors were reflecting on the current state of affairs with humans.

The essence of the book is that males are generally more hostile towards females because females are disgusted by male’s sexual performance. Subconscious thoughts that are functioning on an observable basis through actions of males in society. While I didn’t completely agree with all the topics presented in the book, there were several areas that made complete sense. The Unsure Male presents topics that should be further discussed. In other ways, it also helps to explain how people act in different ways.