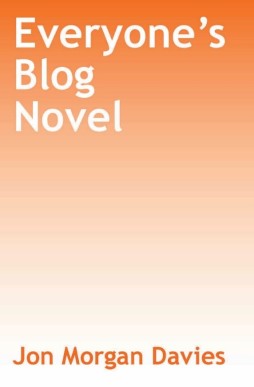 Jon Morgan Davies is a native of California currently residing in Athens, Georgia. His work has appeared in such publications as The Adirondack Review, CutBank, and Southern Indiana Review.

The other major character was the Internet. This entity persuaded “Everyone” in matters to approach life, write the blog novel, and find love. In some cases, the Internet was no more than a search tool. The Internet seemed comparable to and intelligent IM chat bot. Most characters mentioned in the story had some connection with the Internet. At one point, the Internet made a statement that I think best sums up both “Everyone’s” novel and Davies’ novel.

The people at “Everyone’s” job was obsessed over a co-worker named J.D. who fell out of the 12th floor of their office space. In fact many people along the work space gawk over the window. It causes the demise of several others. “Everyone” seems to have a crush on their co-worker named Sam. After many attempts, the two characters interact with each other as potential lovers. With “Everyone” being uncomfortable, they don’t excel much farther.

“Everyone” constantly thought of $5092. That was the amount of money that was needed to get a new car. With life there are unexpected events. “Everyone” had their fair share of events and bills. They dealt with their kid eating from a huge amount of chocolate and going to the hospital.   There are several oddities about this book that stick out. The way the book is written is tiresome to read and doesn’t make sense in other parts. Though the name of the character is “Everyone” the only time that it is capitalized is at the start of the sentence. Davies uses both pronouns when referring to “Everyone” but switches back and forth between them. In some cases he uses, his or her. And at other times, she or he. Either way, it adds a difficulty and shroud to the book.

If you’re a reader that is interested in abstract themes and storytelling, give this book a try.